Exceptions are: four courts located at the north 11/P!, 12/P2, 13/P3 & 14/P4 which may be permitted for special events through the City of San Diego Permit Center, city of San Diego Park and Recreation Youth Clinics, and two long standing tournaments: CBVA Father’s Day Tournament and the Polar Bar Classic.

2. Women’s Courts:  Women’s courts are available for play in the following order; Women’s games, Reversed coed games, Mixed play.  If coed/mixed games are in effect, players are asked to yield the courts at the conclusion of their games to any women players who are waiting for a net (no challenge necessary). Men’s coed teams cannot challenge a women’s team currently on the court unless the women voluntarily accept such a challenge.

3. Men’s Courts:  Men’s courts are available for play in the following order;  Men’s games, Coed games, Women’s games.  If women’s games are in effect, Players are asked to yield the court at the conclusion of their games to any male players who are waiting for a net.  However, if coed games are in effect, a mens team must challenge and win in order to receive the court.

4. Net Adjustments:  Players are not allowed to change net heights (e.g. women’s to mens or mens to women’s) but may make minor adjustments using the small tension ropes until the net meets the correct height.  Poles are marked “M” for Men and “W” for women.

5. Foursomes:  Closed foursomes (e.g. two teams not accepting challenges) are allowed Monday through Friday from 8:00 a.m. – 10:00 a.m. ONLY.  Players may not hold a court for more than 15 min of a voiced challenge, player must accept challenge or give up the court to players that are present.

6. Challenges:  A player does not have to have a partner present to call a challenge.  A single player may call a challenge and request the services of a member of the leading team as his or her partner.  However, challenges must accept team configurations (see rule #7).

9. Etiquette: Behavior including verbal or physical abuse, abuse of nets or poles, excessive profanity, public drunkenness or actions that interfere with the well-being, safety and enjoyment of other players will not be tolerated.  Violations of Municipal Codes will be subject to citation.  No glass is allowed on the beach.  Keep our beach beautiful and clean up your trash.

10.  Rules of the Game:  rules shall be appropriate to the level of play, rules shall apply to the higher level (e.g. in hand setting). No referees are required. The policy will be to call your own fouls and settle disputes with a replay. CBVA rules are recommended.

11. Portable Nets: In order to avoid interference with other beach uses, no portable nets allowed between the permanent court and the seawall, or to interfere with “Over-the-Line” play.
12. Reports: Please contact The City of San Diego Park and Recreation Department at (858) 581-9976 to report courts concerns. Tampering with equipment is prohibited.Note: Training is allowed by permit only M-F on courts 11, 12, 13 and 14.
San Diego BIG – Beach Improvement Group
Creating Great Experience at the Beach 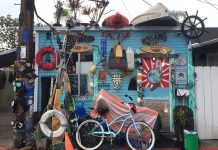 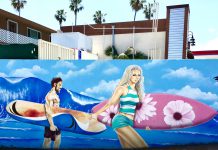 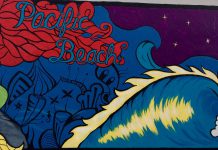 Rules and Regulations in Mission Beach

Check out the surf report in Mission Beach and Pacific Ocean. Click here